Head trauma in the funny pages 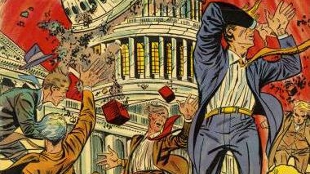 Traumatic brain injury (TBI) is no laughing matter. Unless you’re an indomitable Gaul, that is. In the best-selling Asterix comic books, Asterix, Obelix, and their compatriots, fuelled by magic potion, dish out blows to the heads of Romans, pirates and even extraterrestrials. Perhaps not surprisingly (it is a comic book), the victims of these severe assaults appear to suffer no long term ill effects.Marcel Kamp and colleagues at Heinrich-Heine-University in Düsseldorf cataloged over 700 head injuries in Asterix comic books, analyzing their epidemiology and risk factors. In a recently published paper the researchers report that the major cause of head injury was assault, they say, perpetrated in the vast majority of cases by Gauls—more than half by either Asterix or Obelix. Only 4.5 percent of all head injuries were caused by Romans.Kamp and colleagues used the same methods to analyze the comic books as they would use on real patient populations. In real life, TBI is a leading cause of death in children and young adults today. Common causes of TBI include falls, motor vehicle crashes, assault, and sports or firearm injuries. The ethnicity of TBI victims is also an important risk factor: like the Romans in Asterix, black people are more likely to suffer TBIs than whites in Johannesburg, South Africa, the Bronx and the United States in general. Kamp doesn’t, however, think we can learn too many lessons from the study. “It’s not just a joke,” he says, “it’s something in between.”
Related Items
Uncategorized